Project LEO is one of the most ambitious, wide-ranging, innovative, and holistic smart grid trials ever conducted in the UK

If you want to have news sent straight to your mailbox please visit our Stay Connected page.

LEO partner the Low Carbon Hub has purchased the rights to a 19 MW ground mount solar park which, once built, will be the largest community-owned solar park in the UK.

The project, called Ray Valley Solar, will generate 18 GWh of clean electricity each year, enough to power over 6,000 homes.

To finance the project, Low Carbon Hub has reopened its Community Energy Fund and is inviting investment from as little as £100 up to £100,000. Investors in the Fund will be joining over 1,300 people who together have invested £7 million in support of community energy in Oxfordshire. Before the Fund even opened, over £250,00 of investment had been pledged.

Find out how you can be part of this opportunity to be part of the solution to reaching a carbon-zero energy system.

In March 2020 the Low Carbon Hub opened their Community Energy Fund to new investment on the ethical investment platform Ethex. They had a target raise of £1.5 million to support local projects tackling climate change. They’re thrilled to announce that on the evening of Wednesday 9 June they reached this target of £1.5 million of investment – 24 hours before the official closing date.

The Low Carbon Hub has been absolutely blown away with the huge amount of interest received in investing in this round of the Community Energy Fund, especially over the past week. This has meant that they’ve had to close the Community Energy Fund a day early. However, they do anticipate being able to reopen the Fund soon, as they have a pipeline of upcoming renewable energy projects which will require funding – so if you were thinking of investing but didn’t get the chance this time, there will be further opportunities.

What is the Community Energy Fund?

The Community Energy Fund is the investment opportunity that puts investors’ money to work delivering local projects to tackle climate change, and pays them interest in return for their support.

Since its inception in 2018, the Low Carbon Hub has already raised over £1.5 million through the Community Energy Fund, bringing the total amount invested to almost £6 million, by over 1,000 investors. 100% of the surplus made from selling renewable energy is used to support further community action on climate change. Over £500,000 has been donated since the Hub’s inception in 2011.

What will the £1.5 million raised be put towards?

The money invested in the fund is used to grow the Low Carbon Hub’s portfolio of community renewable energy projects in Oxfordshire, increasing the generation of green energy and to deliver ground-breaking collaborative partnerships which are accelerating the transition to a zero carbon energy system.

The £1.5 million raised in this round of the Community Energy Fund will be used for two key purposes:

“We’re absolutely thrilled with the response to this round of the Community Energy Fund – a huge thank you to everyone who chose to invest in us and put their money to work tackling climate change.” – Barbara Hammond MBE, CEO of the Low Carbon Hub

“I invested for two reasons. Firstly, because there has never been a more important time than now to come together as a community to tackle the climate crisis. Second, because the Low Carbon Hub is exceptional – a rare combination of vision, courage, technical competence and a determination for fairness across our community as we accelerate this transition together.” – Anthony Simpson, Low Carbon Hub investor

“It’s fantastic to see the appeal that this Low Carbon Hub investment raise has had with everyday people who want to use their money to deliver an environmental, social and financial impact. Organisations like Low Carbon Hub are driving innovation across the renewable energy sector and show how assets that create shared value can be scaled to deliver the green and equitable future that 91% of the UK population want to see after the Covid 19 pandemic #buildbackbetter” – Lisa Ashford, CEO, Ethex 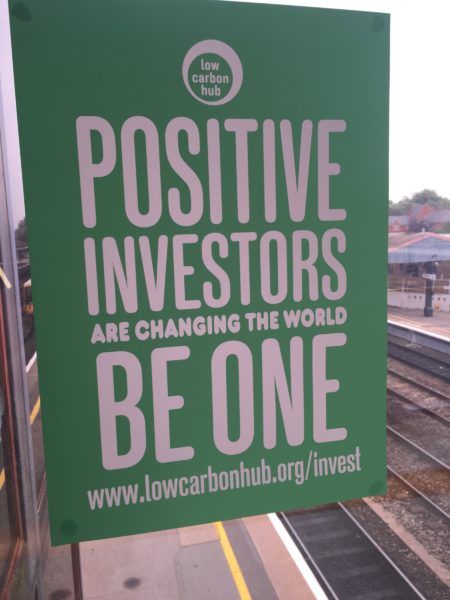 Project LEO (Local Energy Oxfordshire), led by Scottish and Southern Electricity Networks (SSEN), has been given the green light to progress to the next stage of delivering a smarter energy system in Oxfordshire.

Project LEO brings together significant local, academic and industry experience and expertise, to undertake one of the most wide-ranging and holistic smart grid trials ever conducted in the UK. The Project is trialling the matching of renewable generation and demand at a local level, to support new technologies, local markets and community engagement.

In the first year of the three-year project, partners have developed ‘Minimum Viable Systems’ (MVS) that allow the controlled management and monitoring of low-carbon technologies’ impact on the network. The MVS trials that have been completed, tested a range of scenarios that the UK’s energy system will likely experience in the transition to a smarter electricity system and these tests will continue throughout the project, in a larger and more complex fashion.

Project LEO is funded through £13.8m from the Industrial Strategy Challenge fund, managed by Innovate UK and is supported by £26m of private funding from the project partners. As such it is required to demonstrate to Innovate UK that it is making strong progress in delivering its objectives of developing a smart local energy market in Oxfordshire.

Innovate UK has announced that LEO’s project partners have successfully demonstrated strong progress, evidenced through a comprehensive submission for the first year. Project LEO will now develop larger energy trials, building on the key learnings from the initial phase of the project. The project is aiming to create the tools to support the development of a local energy market in Oxfordshire.

“It is fantastic to see Project LEO’s partners’ hard work being recognised by Innovate UK. The learnings we gather from Oxfordshire will help inform a route to net zero that supports local communities taking an active role in the energy system that serves them, across the UK.”

This announcement follows the news that Project TRANSITION passed its Ofgem stage gate process. TRANSITION is testing the most effective system architecture that supports the proliferation of low-carbon technologies and solutions and forms a core part of Project LEO. For further information on Project TRANSITION please visit www.ssen-transition.com.

Welcome to our second Project LEO programme update, which includes information on activities that took place in Q3 & Q4. These updates will be produced quarterly and will include key findings or updates from the partners as they arise.

Our third Project LEO newsletter is now available to download.  Hear more from the project partners on the work taken place so far, and the upcoming targets including the first Vehicle to Grid charging stations for Project LEO.

We are excited to share the news that Project LEO has been shortlisted as a finalist, in the Network Awards 2020 under the category of ‘Partnership initiative of the year’. With such a high calibre of finalists, we are delighted to have reached this key stage. Winners will be announced on 17 March 2020.

Our second Project LEO newsletter is now available to download. Find out what the partners have been working on including information about the first LEO renewable energy project going live.

Welcome to our first Project LEO programme update. These updates will be produced quarterly and will include key findings or updates from the partners as they arise.

A crucial part of Project LEO is the dissemination of project outputs and learnings to external stakeholders and the general public. Sign up here to stay up to date with Project LEO, receive our monthly newsletter and invitations to future events. Click below to read the first ever LEO newsletter.